Kotlin is a strongly typed language and as such, the compiler only allows developers to assign values to variables of the correct type. What that means in English is that only whole numbers can be assigned to type Int, Strings can only be assigned to variables of type String, and so on. Attempting to assign the number three to a String variable results in a compiler error.

The typing system is incredibly advantageous and helps reduce many bugs that are known to happen in weakly typed languages. Developer tools can also more easily examine variables in strongly typed languages and provide code suggestions or check for incompatibilities. For example, when passing a variable to a function, both the compiler and the IDE will issue errors if the variable is incompatible with the method signature.

Types in strongly typed languages can’t be converted readily. In order to convert one type of object into another type, we have to use a technique called casting. Casting tells the compiler that a conversion is OK to make and we are accepting the risk of converting from one data type into another type. Let’s begin with a few classes that give us an idea of what we are working with here. 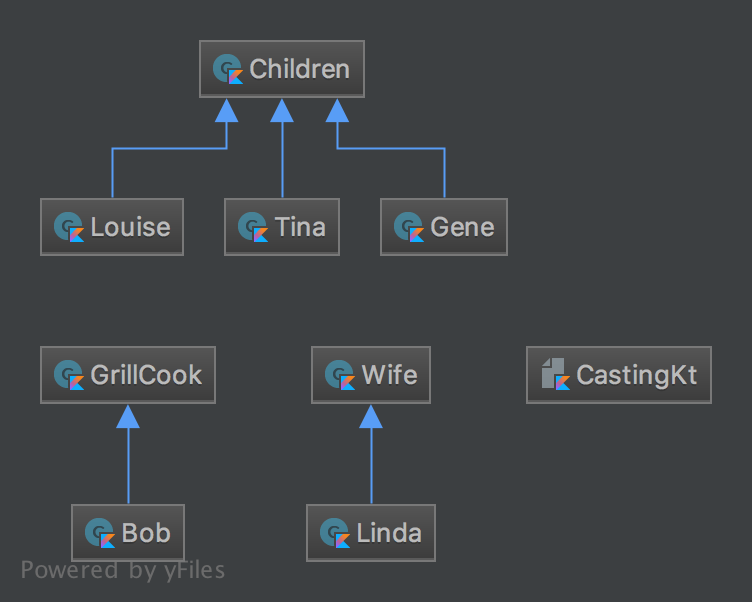 Now let’s begin with some examples of casting between different types.

The above example shows upcasting and downcasting. When we created the bob variable, we declared its type to be Any. Any is the base class of all Kotlin objects, so it’s complete acceptable to treat a Bob object as if it’s an Any. Later on, we wish to cast Bob from any Any object into a GrillCook.

We can also check if an object isn’t a certain kind of object. Let’s consider this code example.

When we add an exclamation point in front of is to make !is, we are saying to check if the object isn’t a certain kind of object. In this case, Linda does not extend GrillCook, so she’s not of type GrillCook. We proceed into the if block but Linda is still treated as type Any. The compiler only knows that she isn’t a GrillCook, but it still doesn’t know exactly what Linda is other than Any.

We can use the when expression for casting also. Let’s take a look at Gene.

In the case of the when statement, if the gene variable, which if of type Children, is Gene, then the is Gene -> code is executed. The gene variable will be treated as type Gene for the duration of the block because once again, the compiler knows that the variable has to be Gene at that point. The other two clauses, is Tina -> and is Louise ->, do not execute in this example. This is because the gene variable is not either Tina or Louise so the is check returns false for those two conditions.

So far, all of the casts we have performed are known as safe casts. They are safe because we have verified the type of the object at runtime and only performed the cast after it was safe to do so. However, we can perform unsafe casts. When we perform an unsafe cast, the compiler will usually issue a warning, but it will allow us to make the cast.

This cast will always result in a ClassCastException. That’s because GrillCook is not a Children object.

When run, we get the following output.

Stone Soup Programming is dedicated to those who share a passion for learning computer programming and software development.